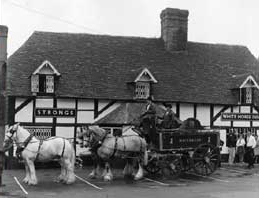 On the site of Gosport Farm stood a pilgrims’ inn called ‘God’s Port’, drawing its business from the old Saxon road running between Romsey and Winchester , and drawing its water from the ancient spring at Washers Well. The route of the main road has changed, however, and now the busy A31 (now the A3090) carries its traffic well away from the site of the old inn. In 1610 a man named Wooll hanged himself at Gosport , which is in the parish. As the law demanded, he was buried as far from hallowed ground as possible, down by the railway bridge off Pound Lane – with a stake driven through his heart, to stop the Devil stealing his soul.

Situated three miles East-North-East of Romsey on the A31 road, the parish covers an area of 1,066 hectares and the population in 1981 was 1,650. The main road runs through the centre of Ampfield village and the C.19 blue brick church at the eastern end of the village is a familiar sight to motorists travelling between Winchester and Romsey. The small village of Knapp , with its thatched cottages, lies to the north of Ampfield, and to the east the parish abuts the housing estate at Hiltingbury, so an area of modern residential development is situated at Hocombe.

The Rev W. Awdry, author of the Thomas the Tank Engine books, was born and lived as a small boy in Ampfield, where his father was vicar of St Mark’s. His earliest recollection was of going down Pound Lane , climbing up the embankment, and strolling along the old London & South-West Railway line.

The two World Wars did not pass Ampfield by. During the Second World War, the Old Thatches public house became a First Aid post and the White Horse a mortuary (though it was never used).